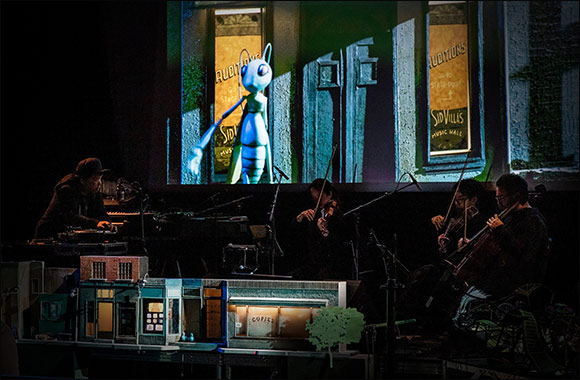 Share Home >> Entertainment
● The live animated graphic novel will be performed, filmed, and scored in real time, using performers, musicians, technicians, miniature sets, and puppets to bring the characters to life
● Kid Koala returns to The Arts Center after the soldout and successful debut of Nufonia Must Fall in May 2017
Abu Dhabi, May 9, 2022: The Arts Center at NYU Abu Dhabi (NYUAD) will host the Middle East premiere of The Storyville Mosquito by returning artist and world-renowned scratch DJ, music producer, and award-winning graphic novelist Kid Koala on May 12-13 at 7pm.
Co-commissioned by The Arts Center, The Storyville Mosquito is the story of a young mosquito who leaves his small town in the country to seek fame and fortune in the big city and fulfill his dream of playing in one of the greatest jazz bands of all time at Sid Villa’s Music Hall.
The live animated graphic novel will be performed, filmed, and scored in real time. A team of performers, musicians, foley artists, and technicians cinematically bring the characters to life using miniature sets, puppets, multiple cameras, and screens. The puppets tell the story accompanied by an original music soundtrack featuring a trio of musicians and Kid Koala on turntables, keyboards, and electronics.
Executive Artistic Director at The Arts Center at NYUAD Bill Bragin said: “Kid Koala’s show is magically playful, as you watch an animated film being made in real time, in a moving performance full of emotion, craft, and art that welcomes the entire family. As with his previous show for The Arts Center, Nufonia Must Fall, it is complicated to describe The Storyville Mosquito verbally, but the second you see it, you get it. Kid Koala brings such a joyous and open energy, and brilliant sense of innovation and inventiveness to NYU Abu Dhabi, and we are thrilled to finally premiere this piece that we co-commissioned after a two-year pause due to the pandemic.”
The Storyville Mosquito speaks to the themes of honesty, improvisation, inner voice, style, and collaboration. It is the follow-up to Kid Koala’s hugely successful Nufonia Must Fall live performance, which debuted at The Arts Center in 2017. This premiere, which further develops Kid’s skills as a composer, writer, and director, is long awaited.  In March 2020, Kid Koala was poised to fly to the UAE when the extent of the pandemic became clear.
Kid Koala added: “I am delighted to finally get the chance to debut The Storyville Mosquito. In March 2020, my team and I were so excited by the prospect of unveiling this show at NYUAD and obviously the rest is history. I thank The Arts Center for their patience and support in helping to make this happen. We now look forward to kicking off our world tour of the production at NYUAD's beautiful Red Theater. We had such a wonderful time at the Arts Center for the Gulf premiere of Nufonia Must Fall in 2017 and have been eagerly anticipating our return. I can promise the UAE audience that The Storyville Mosquito will be worth the wait. Come join us and bring the family!”
Event: The Storyville Mosquito by Kid Koala
Date: May 12 and 13 at 7pm
Venue: The Red Theater, The Arts Center
Admission: AED100