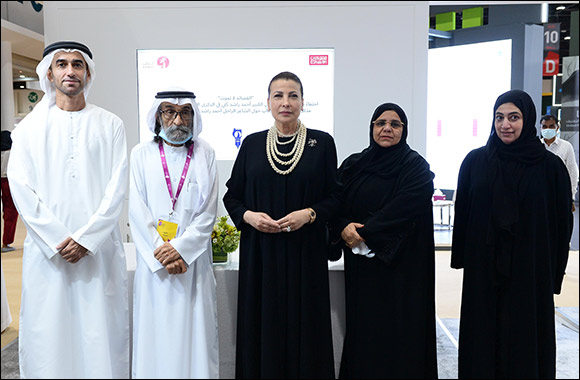 Abu Dhabi, UAE, 27 May 2022:  The Abu Dhabi Music & Arts Foundation (ADMAF) has signed an MOU with the Emirates Writers Union on Thursday 26 May, coinciding with Emirati Writers Day, to publish a biographical narrative of the late pioneering poet Ahmed Rashid Thani, a leading figure in Emirati prose poetry. The agreement was signed at ADMAF’s pavilion at the Abu Dhabi International Book Fair, which is taking place from 23-29 May at ADNEC.
H.E. Huda I. Al Khamis-Kanoo, Founder of the Abu Dhabi Music & Arts Foundation, said: “We are pleased to present the 7th edition of the Riwaq Al Adab Wal Kitab Initiative in partnership with local publishing houses, which seeks to strengthen and support the UAE publishing industry and present the literary achievements of Emirati and Arab writers. As part of the initiative’s cultural programme entitled ‘Poems Do Not Die’ in honour of the legacy of the late Emirati poet, Ahmed Rashid Thani on the tenth anniversary of his passing, today—on a day which celebrates and honours Emirati writers— we sign an MOU with our long-standing partners, Emirates Writers Union, to publish a biographical narrative about the pioneering poet whose achievements greatly influenced Emirati prose and whose research helped document Emirati heritage.”

Sultan Al-Amimi, Chairman of the Emirates Writers Union, said: “This agreement with ADMAF constitutes a new stage in the partnership between the Writers Union and cultural organisations in the UAE, where for the first time an agreement was devoted to the production of a single Emirati writer, to highlight a different aspect of his cultural production.

The timing of this agreement coincides with the Emirati Writer's Day, which is also the day of the establishment of the Emirates Writers Union, during the activities of the Abu Dhabi International Book Fair, to give the agreement another dimension of cultural presence in the Emirati cultural scene.
Our cooperation with ADMAF comes as a continuation of the previous cooperation between us, a cooperation that we are very proud of. The late writer Ahmed Rashid Thani was selected to be the focus of this agreement due to the great status he managed to make for himself through the diversity of his creative production in theatre, poetry and urban literature, biography and research. His project deserves to be in the spotlight which was based on a conscious and academic vision,” he added.

The signing comes as part of the cultural programme of the 7th edition of the Riwaq Al Adab Wal Kitab initiative, entitled “Poems Do Not Die,’ in celebration of the great poet. In addition to the MOU signing, the programme presents 13 more literary works published with the support of the Emirates Writers Union and Nabati and Hamaleel publishing houses, and includes workshops, talks, poetry recitals, book signings and meet-and-greets with the authors to be streamed on Abu Dhabi Festival’s digital platforms.

The late Ahmed Rashid Thani, who started writing poetry in the late 1970s and was deeply drawn to theatre and literary research, is described as the “Reviving Poet” across the poets’ communities in the UAE, GCC, and the Arab world. He was given the title for his considerable works published in many journals and newspapers, and other works that were translated to French and German. His poetry collections include “Blood of the Candle”, “Night Comes and Takes Me”, “Here Lies The Pleasure”, “The One Who Merges The Worlds Of Love And Sea”, and “The Clouds At The House”.
Additionally, he is considered as the most active, hardworking, prolific, and accurate among the national researchers of Emirati heritage. Indeed, the late poet has left behind a unique collection of printed and transcribed books, including “Ibn Thaher: Documentary Research on his Popular Biography”; “Stories from the Emirates”, published in three parts: “People of Patience”, “Dardamis”, and “And Only Hamdan’s Camel Remains Sitting in the Shade”; in addition to “Between Speaking and Writing Resides the Emirates’ State” and much more.

He also made significant contributions to folk poetry,  working primarily in three fields; documenting poets’ lives, starting with Al-Majidi Bin Zaher then Ali Bin Muhin Al Shamsi and other related poets whose life history influenced his own work. The second was dedicated to documenting Nabati poetry and attempting to pinpoint its start, and following its development and its impact on present day style, language and music. Lastly, he researched and documented folk poetry by exploring the texts of Al-Majidi Bin Zaher’s poetry.

Riwaq Al Adab Wal Kitab is part of 19th edition of Abu Dhabi Festival held under the theme “Crafting an Emirates State of Mind: Creation, Innovation and Joy”. For more information about the initiative and to register for its programme of events please visit: https://abudhabifestival.ae/programme/riwaq-al-adab-wal-kitab-2021/ and the Festival’s social media accounts on: Facebook (abudhabifestival), Twitter (@abudhabi_fest), and Instagram (@abudhabifestival).

Next in Government, Legal & Humanity