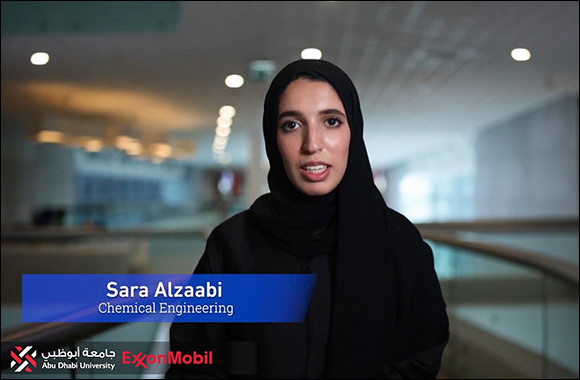 Share Home >> Education & Training
• 813 students supported by 367 mentors from 53 universities across the MENA region including the UAE, Egypt, Jordan, Saudi Arabia and others took part in the competition
• 70 teams across 27 categories were recognized for their outstanding research and awarded monetary prizes
Abu Dhabi, United Arab Emirates, 03 June 2022: Abu Dhabi University (ADU) held its ninth annual Undergraduate Research Competition (URC) and awards ceremony. The URC provides an opportunity for students to transform their creative ideas into research and innovation projects to support the development of their 21st century skills to produce the researchers, innovators and entrepreneurs of the future for the UAE’s knowledge economy. ADU’s URC is the largest undergraduate research event in the GCC and MENA region that encompasses all major programs and serves as a platform that allows universities to showcase their undergraduate research. The competition is sponsored by ExxonMobil, one of the world’s largest publicly traded energy providers and chemical manufacturers.
This year’s competition witnessed its highest number of submissions received from 320 research teams which included 813 students supported by 367 mentors from 53 universities across 10 countries including GCC countries and beyond. Teams were also given the opportunity to submit their research projects to be included in the ‘Launchpad Start-Up’ program in collaboration with ADU Innovation strategy (ADUi) which serves as an engine for the advancement of innovation and entrepreneurship education in the UAE by supporting the incubation of university enterprises. For selected projects, the Launchpad Start-Up program nurtures a pipeline of university start-up and spin-out businesses by providing support including mentoring and funding to transform their promising projects into commercial enterprises.
During the competition 10 teams from Abu Dhabi University and 60 teams from other universities were awarded prizes across 27 categories for their outstanding research, with three teams granted Launchpad Start-up Initiative Awards.
Through URC, ADU enables young researchers to explore methods that extend their knowledge and improve their critical and analytical thinking by presenting their projects to a panel of judges from various universities and industries. As an integral part of ADU’s vision, the university aims to strengthen students’ confidence and research abilities by giving them the space to transform their projects into innovative business ideas, while exploring new frontiers in their fields of study and preparing them for graduate level studies.
Professor Philip Hamill, Associate Provost for Research and Academic Development at Abu Dhabi University (ADU), said: “We are honored to once again collaborate with ExxonMobil to host the ninth edition of the annual Undergraduate Research Competition (URC). We owe this accomplishment to all the students who submitted their projects and participated in Abu Dhabi University’s (ADU) URC. The competition aims to equip students with a research-centric and entrepreneurial mindset which will best prepare them for the knowledge-economy driven job market.”
He added: “Developing a project and submitting an application is an invaluable learning experience for students during their educational journey. The competition helps in building skills necessary for the 21st century employment including teamwork, critical thinking, problem-solving and communication skills. We would like to extend our thanks and appreciation to all the mentors and judges for their hard work and efforts as well as the continued sponsorship of ExxonMobil for enabling the success of the competition.”
Christian Lenoble, ExxonMobil’s UAE Lead Country Manager commented: “In the UAE, we work with Abu Dhabi University (ADU) to ensure our efforts are tailored to address both students and educational needs. We are committed to education being the fundamental building block of individual opportunity and economic growth, one in which STEM skills in particular is critical. Towards that goal, we are privileged to sponsor Abu Dhabi University’s Undergraduate Research Competition (URC) for the past two years, fostering the interest of students in the UAE and the region to try out new ideas and innovate with cutting edge technology.”
ExxonMobil is one of the world’s largest publicly traded energy providers and chemical manufacturers, develops and applies next-generation technologies to help safely and responsibly meet the world’s growing needs for energy and high-quality chemical products.