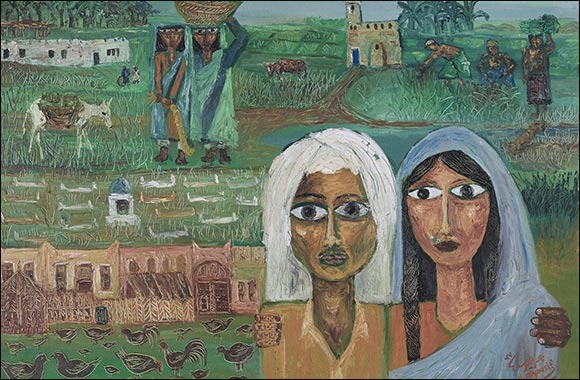 Share Home >> Entertainment
● Curated by Dr. Aisha Stoby, Khaleej Modern: Pioneers and Collectives in the Arabian Peninsula, 1941-2008 marks the first-ever survey exhibition chronicling modernism and the visual arts in the region
● The show premieres several unique works by communities and collectives in the Arabian Peninsula that have not been exhibited before in the context of the region’s art history
● The exhibition develops inclusive narratives of modernities and art movements in the Gulf region
Abu Dhabi, June, 29, 2022: The NYU Abu Dhabi (NYUAD) Art Gallery today announced key artists for its fall 2022 exhibition, Khaleej Modern: Pioneers and Collectives in the Arabian Peninsula, 1941-2008. Curated by Dr. Aisha Stoby, who this year curated the inaugural Oman Pavilion at the Venice Biennale, Khaleej Modern is a landmark historical survey of twentieth century modern art movements across the Arabian Peninsula, collectively known in Arabic as the “Khaleej.”
Opening September 6, the exhibition is based on Dr. Stoby’s PhD research tracing the region’s ‘pre-boom era’ of the twentieth century through 2008 and examining the evolution of visual art movements as the discovery of oil began to transform the region. It delves into the shifting understanding of public and private spaces and their relationship to national identity as expressed through art practices.
Commenting on the exhibition, Executive Director of The NYUAD Art Gallery and University Chief Curator Maya Allison said: “An exhibition like this is quite rare, a kind of opening salvo and call to action, offering new vistas on art history and art practice in this region. Rather than a definitive survey, this project sets us on a journey to explore the under-studied – and, for some people, unknown – emergence of modern art in the Arabian Peninsula over the last century. It is a profound honor that Dr. Stoby will present her original research with us, in this exhibition that was many years in the making. I thank her for partnering with us for this crucial, pathbreaking project.”
For Khaleej Modern, Dr. Stoby traces local art histories contextualized by deeply rooted traditions, the ongoing modernization process and evolving national identities. Foregrounding the importance of community and early art institutions, the exhibition brings to life the curator's research on the artistic pioneers and collectives that sprang up in the twentieth and twenty-first centuries, beginning with the first exhibition of Kuwait’s Al Mubarakiya School in 1941.
Saudi Arabia’s modern art community began as early as 1938 with Mohammed Racim (1911-1974) in Jeddah, and some of the artists in the exhibition include Mounirah Mosly, Safeya Binzagr, Abdulhalim Al Radwi and Abdullah Al Shaikh. The Saudi House of Fine Arts in Riyadh, meanwhile, included to works by Mohammed Al Saleem and Abdulrahman Alsoliman.
By the 1950s, Bahrainʼs Manama Group had formed (Abdul Karim Al-Orrayed, Nasser Al- Yousif and Ahmed Qassim Al Sunni). The two decades following saw the emergence of Qatar’s The Three Friends collective (comprising Yousef Ahmed, Hassan Al Mulla and Mohammed Ali Abdullah), alongside the development of the UAE’s early art practitioners, including Abdul Qader Al Rais and the cluster of artists known as The Group of Five, Hassan Sharif, Abdullah Al Saadi, Mohammed Kazem, Mohamed Ahmed Ibrahim, Ebtisam Abdulaziz, and their community. The exhibition also presents important figures in Oman’s art history, artists Anwar Sonya and Rabha Mahmoud, as well as the pivotal group, The Circle, led by Hassan Meer.
Dr. Aisha Stoby noted, “Many of the works in this exhibition will be on view for the first time in decades, and it is a genuine privilege and honor to have been invited to bring this work to a wider audience. Enhanced by the presence of rare and archival material, Khaleej Modern creates a space and offers resources for learning and re-understanding our own histories. More broadly, we hope the exhibition will contribute to wider regional and global understandings of modern visual art. This project responds to emerging debates around recentering art narratives, toward a more nuanced and inclusive appreciation of global art histories. It has been incredible to be a part of this project and to see the artworks of these pioneering artists brought together for the first time.”

An Icon in Solid Gold