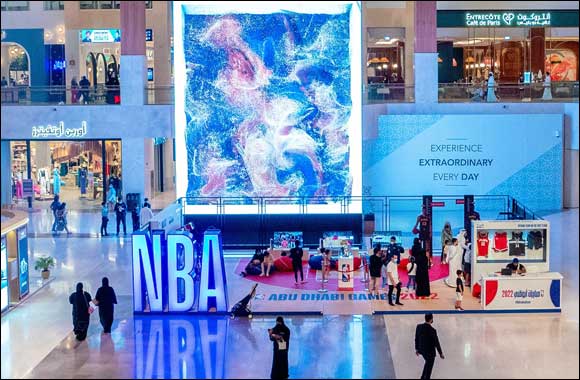 Abu Dhabi will make basketball history when the Milwaukee Bucks face the Atlanta Hawks at Etihad Arena as part of the NBA Abu Dhabi Games 2022. The two preseason games on October 6 and 8 will be the first ever visit to the Arabian Gulf for the world’s most popular basketball league.

From September 22 to October 8, Yas Mall is partnering with DCT Abu Dhabi to host amazing fan activations, including the chance to take a photo next to the glittering Larry O'Brien NBA Championship Trophy.

Visitors can play retro arcade and PlayStation basketball games, enjoy pop-a-shot games, play friendly matches on the court, pose next to life-size cut-outs of some of the towering players, and get a close-up look at the Tiffany and Co-designed NBA trophy.

Fans eager to purchase NBA Abu Dhabi Games 2022 tickets can also do so at the pop-up stand, which will operate from 10am to 10pm on weekdays and 10am to midnight on weekends.

The official retail shop will be situated on the first floor immediately above the Yas Mall activation. It will sell official merchandise including jerseys, caps, apparel, memorabilia, DVDs, and many other licensed NBA products for all 30 teams.


Umm Al Emarat Park to Host Winning Installation of The Christo and Jeanne-Claude ...

Etihad Airways Set to Reintroduce its much-loved a380 Fleet after a Surge in Dem ...

Graduates of Abu Dhabi University Rated Most Employable in the Nation

Leading Natural Language Processing Conference Kicks off in Abu Dhabi for the Fi ...

UAE's People of Determination Reaping the Benefits of Gaming and Looking Forward ...

1004 Gourmet Opens a Brand New Third Location with a Makeover

Over a Million Passengers Wizz Their Way to Attractive Destinations through the ...